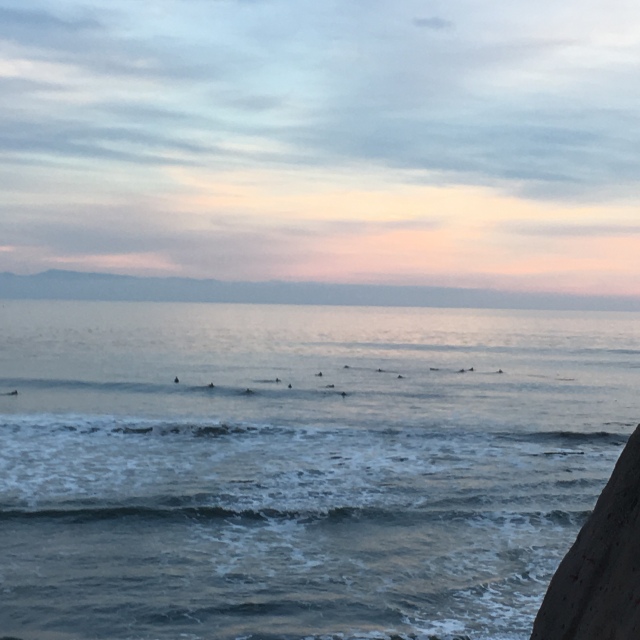 Today’s first: Headed to pleasure point, famous surf spot in Santa Cruz, CA.  Got there right at Civil Twilight (just after sunset).  Was reminded of the phases of ‘twilight’.  Threw the info down at the end of this blogpost, this site is great if you want to know the exact minutes for your local area: https://www.timeanddate.com/sun 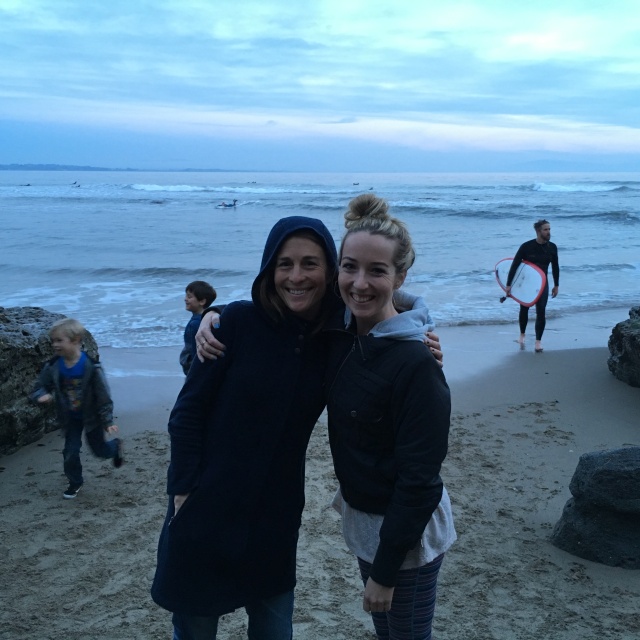 Kiersten and Alli – both Santa Cruz natives.  Unexpected added pleasure (no pun) to the experience.  Nothing like good conversation upon first encounters.. 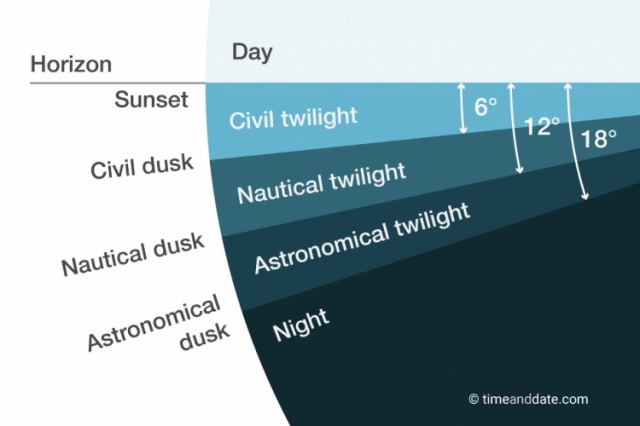 Civil Twilight
Each twilight phase is defined by the solar elevation angle, which is the position of the Sun in relation to the horizon. During civil twilight, the geometric center of the Sun’s disk is at most 6 degrees below the horizon. In the morning, this twilight phase ends at sunrise; in the evening it begins at sunset. Sunrise and sunset are the moments when the Sun’s upper edge touches the horizon.
As the Earth’s atmosphere scatters and reflects much of the Sun’s rays, coloring the sky bright yellow and orange, artificial lighting is generally not required in clear weather conditions to carry out most outdoor activities. Only the brightest stars and planets, like Venus and Jupiter, can be seen with the naked eye.

Timing & Length
The duration of each twilight phase depends on the latitude and the time of the year. In locations where the Sun is directly overhead at noon – for example at the Equator during the equinoxes – the Sun traverses the horizon at an angle of 90°, making for swift transitions between night and day and relatively short twilight phases. For example, in Quito, Ecuador, which is very close to the Equator, civil twilight begins only about 21 minutes before sunriseduring the equinoxes.
At higher latitudes, in both hemispheres, the Sun’s path makes a lower angle with the horizon, so the twilight phases last longer:
In New York (about 40° North) and Wellington (about 40° South), during the equinoxes, it takes about 28 minutes from the beginning of civil twilight until the Sun rises.
In Oslo (about 60° North) and the northernmost tip of Antarctica (about 60° South), the same process takes roughly 43 minutes.

Twilight Around the Poles
At high latitudes and around the summer solstice, the Sun does not move lower than 18° below the horizon, so twilight can last from sunset to sunrise.
The area experiencing all-night civil twilight around the summer solstice lies between about 60°33′ and the polar circles at 66°33′ North and South. In the northern hemisphere, this roughly correlates with the southern half of the Northwest Territories and the Yukon Territory in Canada, including their capitals, and Whitehorse. In Europe, it covers much of central Scandinavia. An all-night period of civil twilight is also referred to as a white night.
Within the polar circles, the Sun does not set at all in the summer, so there is no twilight during that time of the year. However, in locations around the poles that experience polar night during the winter months, the Sun may reach an angle of under 18° below the horizon around midday. This angle causes a short daily period of astronomical, nautical, or civil twilight, a temporary break from the complete and permanent darkness that envelops polar regions in the winter.