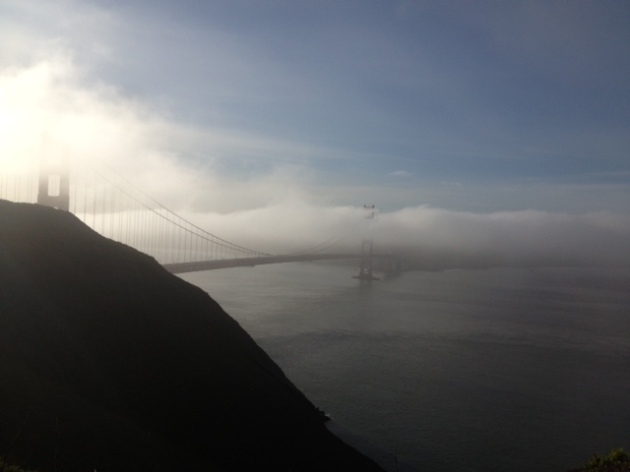 (have soaked in this view on my road bike trekking up Hawk Hill from the Golden Gate..morning was a neat for layer during climb,

clear skies on the descent..)

Took five minutes today at the top of my Marin Headlands ride to read a sign I have cycled by plenty of times. As I stared out at the Pacific I felt so beautifully INsignificant and a tiny part of something so incredible. Get outside often to do something that makes you feel small – helps ease that stress 😉

The day’s FIRST:  read the signs up on top of the headlands that I would if I were a tourist visiting my town.  Love acting as

if as a local, the things we learn..

What I re-learned this morning was that the Headlands on both sides of the Golden Gate Bridge are comprised of ancient oceanic rock that once resided at the bottom of the Pacific Ocean. Scientists believe that the radiolarian ‘chert’ (see description below) was forced to its present position over millions of years by a collision of the continental and Pacific plates.

“Chert”: mostly composed of radiolaria fossils, so its layers tell us the origin of the rocks. It takes around 20,000 years for one inch of chert to develop. — The fossils in the headlands chert are tropical species from the equatorial Pacific (again, lived millions of years ago, pretty cool).

***Each centimeter of chert contains 10,000 years of sedimentation. The folding/twisting patterns within the layers were caused by the upward thrust and rotation of the rock as the pacific plate gradually forced the headlands up out of the sea.